You are here: Home › Self-empowerment › A ROMANOV 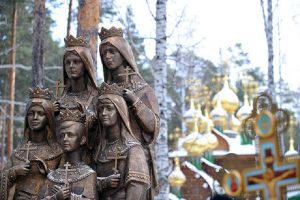 A while ago I began to examine clues suggesting I may have had a previous life as a Romanov.
I began to research the lives of the last Romanov family of Russia, assassinated July 17, 1918.
As I connected with the energy of the Romanovs, further prompting told me I was on the right track
so I investigated some more.
I had been shown other lives previously so why this one now?

During a session of ancestral clearing the penny dropped and the issue became perfectly clear.
Energy was cleared out of my right shoulder which was linked to my life as a Romanov.
The issue was that of feeling unworthy as a female & unsafe with men.
As the second oldest daughter of four, we were all discounted one after another. A son was coveted in order to produce an heir. All of Russia constantly chastised the Tsarina and we, the daughters, felt unworthy.

Earlier in this life the issue came to the forefront when I heard my grandfather say that only males were worthy grandchildren as each of his other four granddaughters was born. Once again my soul was displaying an issue already present in the psyche.

In hindsight clues were mounting up to get my attention. I even heard snippets of conversation from that previous life. My soul was prompting me to resolve this issue in order to move beyond it.
I can understand the imprint left from this life as it had some horrendous times with a very cruel, merciless ending. As the life preceding this present one, there has not been an opportunity to deal with the emotional uptake.

I am grateful for the insight and understanding this experience has brought. Sessions of ancestral clearing have me finally examining the impact and allowing me to put this entire matter to rest.